Francis, who works in the 71st precinct in Crown Heights, was arrested for public lewdness and endangering the welfare of a child, police sources say.

The arrest comes on the heels of an investigation into several similar incidents throughout Rockville Centre.Three similar crimes happened in February, Rockville Center police say.

The incidents all happened between 8 and 9 p.m. The suspect, described as being about 5-foot-10 and weighing about 220 pounds, stands peering into the victim’s window.The suspect has had either a flashlight or forehead light and was naked from the waist down.

So this morning I threw on the local news and was totally broadsided by this absolute gem of a story.  There was a rampant masturbator on the loose that had caused some stir on Long Island in the past  couple weeks, but the guy was never caught. Well the dude finally got popped, and what do you know! He’s one of our boys in blue! NYPD Detective Robert Francis, come on down to receive our first City Scumbag of the Month award! These awards will be handed out on the last Monday of every month, and will be reserved for the men and women of the five boroughs who’s impending doom can not come soon enough. The rapists, muggers, pedophiles, corrupt cops, masturbating cops. Those sorts of things.

Detective Francis just couldn’t help himself could he. He couldn’t just sit at home, and mash it like the rest of us. He just had to go out and channel his inner John Cusack in Say Anything except instead of holding a radio and wearing a trench coat, he’s holding his dick and wearing a god damn miners light. And if the story wasn’t already ironic enough, we have the point of origin in this suburban scandal at no other than Seaman Ave. 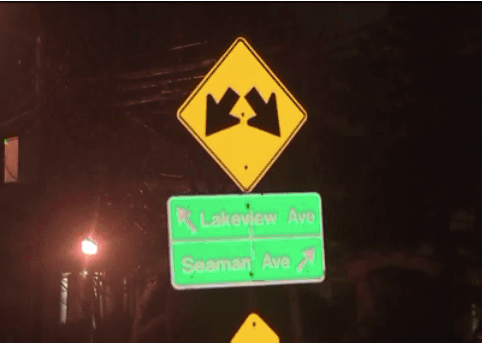 Also, you have to wonder if this guy has gone and jerked off at the scene of any homicides right? I mean, I have never heard of someone who intentionally wanted to leave their DNA at the scene of a murder, but this guy sounds like someone who would get a thrill off of that sort of thing. The dude gets off from any sense of acknowledgment. HE needs to know, that YOU know, that HE’S a sexual deviant.  Asking him in a court of law “Is this your cum Detective” would illicit a response only Dennis Reynolds is capable of expressing.