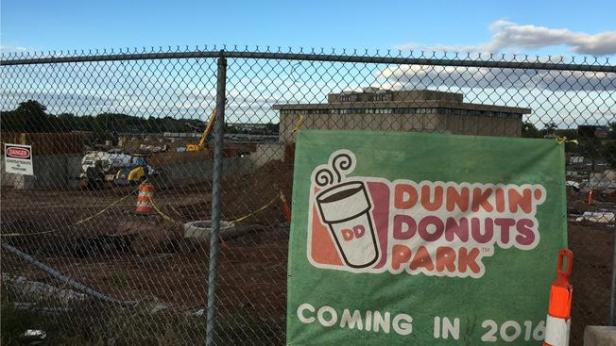 Finally the Yard Goats have a home! They spent their entire inaugural season on the road after their ballpark became the biggest running joke in Hartford history.

The ball park was supposed to be ready for the first game last summer but WHOOPS they missed the deadline. Then the deadline got pushed again and again. Then the city fired the contractors and halted construction last summer, bringing in another contractor to fix the mess and get it ready for 2017.  A couple months ago it was announced that the FBI was investigating the original contractors which is definitely something you want to hear when your tax dollars went directly to those people. The assumption is it will have something to do with misuse of government funds.  But forget all that! Baseball is starting in Hartford!

1 year and $71 million dollars later we finally have Dunkin Donuts Park, a sure fire historical landmark in the making… 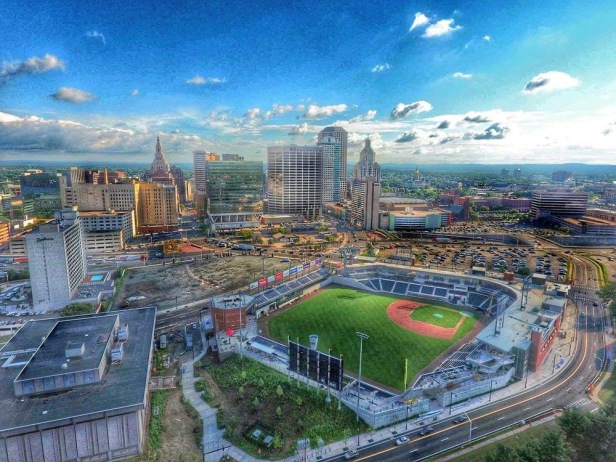 Fun fact: This stadium does not have the resources to house the team full time. They will just play their home games there.  The team will train and practice at University of Hartford because the school has the facilities to accommodate that sort of thing, whereas Dunkin Donuts Park does not.
I guess $71,000,000 doesn’t buy you what it used to. ¯\_(ツ)_/¯

Don’t forget- No minor league stadium is complete without a ridiculous gimmick! You’ll never believe the whacky idea the people at Dunkin Donuts Park came up with to celebrate home runs…

Hey, while we’re here, let’s talk about the Yard Goats real quick. I know most people’s first reaction is “what the hell is a yard goat… that’s an awful name”.  Well those people are wrong. Its an awesome name. It’s an old timey railroad term and Hartford is a city with a pretty decent railroad history. Take a look at this old railroad company logo from 1872 that originated in Hartford.

Font look familiar? Hell yeah it does. Not only did the Yard Goats get their name from some railroad slang, they got their slick font straight from the god damn company itself. Brilliant move. Also great decision to use the same color scheme as the former NHL Hartford Wailers. Everyone knows the people of Hartford are still crying over that loss. Just another tug at their heartstrings. Ruthless but I love it.

Oh and how about this: You know what keeps minor league teams alive? Money. You know how they get money? It sure as shit isn’t from ticket sales alone. It’s also from sponsors and merchandise. You know how you sell a shitload of merch? You pick a ridiculous mascot with an awesome logo and slap it on a hat.

That’s an awesome array of hats. Having a good hat is crucial to a minor league team’s success. (side note: I’ve never been to Lehigh Valley, and truth be told I’m not even sure where it is. But I’ve got a Lehigh Valley IronPigs hat because its incredible and I love it.)  Top left is my favorite because I’m a sucker for classy looking stuff, but the two-tone cap in the middle is a BEAUTY.

But we’re not done yet. How do you create buzz and get people talking about your team? (aside from having a stadium cost the city millions, be over budget and a year behind schedule) You create your own news. Meet the Yard Goats mascots: Chompers and Chew Chew

That is a fucking nightmare… but hey everyone still talks about how bad they are. If you can’t be the best at something then just be the worst I guess. Same amount of exposure. Middle of the pack gets you nowhere.