Quick opening shot of Young Eli getting chased down by a Comanche on a horse. Then we go straight to where we ended last season. The blown up oil drill.

Older brother Phineas knows it’s up to him to get them another oil drill. He’s the smart businessman of the family.

We get a scene with Mr. Sullivan and granddaughter, Jeannie. I’m not really sure what this scene does? It shows us the Jeannie is more interested in stopping the bad guys than doing kid stuff. I think they are setting up Jeannie to be taken by a rival and held hostage much like Eli was when he was her age.

We see Cesar hanging from his arms in the shed and it jump cuts to Eli hanging by his arms back in 1849. The symbolism is so heavy-handed. We get it. Old Eli is doing to his enemies what the Comanche did to Young Eli.

Young Eli is part of some cfnm cruelty party with a group of female Comanches. Instead of sex, it seems like they are more interested in killing him though.

Maria is worried because her brother in law (Cesar) has gone missing. She blackmails the sheriff to investigate it. The Sherif heads to the McCulloughs and up the price for him to turn a blind eye.

Pete and Eli play good cop bad cop with Cesar in an attempt to find out who ordered the burning of his oil drill.

Sally and Phineas have a conversation. Once again the writing is very heavy handed. Sally literally says, “Sometimes I think I married the wrong brother.” C’mon guys, we’re not that stupid of an audience.

Eli and Pedro meet at the river that connects their land. Kind of like when Tim and Wilson met at the fence to talk. Pedro says, he will let Eli do whatever he needs to with Cesar in exchange for a future of peace. 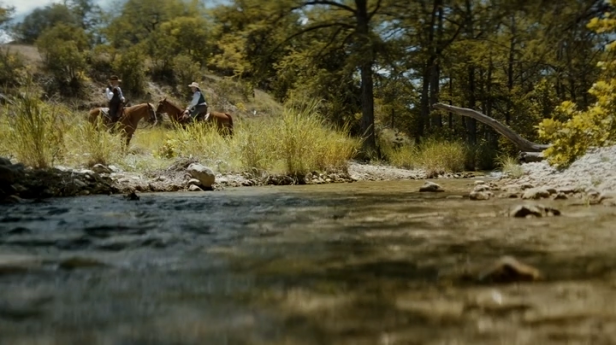 Young Eli gets advice from Toshoway on dealing with the abusive Comanche women. He tells a story about a coyote and a plum tree. Every time the guy reaches for a plum the Coyote threatens to bite him. In the end, Toshoway says, “sometimes it’s better to be bitten that to starve”.

Old Eli tells Pete they have to kill Cesar even though he confessed. “You can’t return a steak after you’ve taken a bite out of it” (cut off an ear).

Young Eli takes Toshoways advice and reaches for the plum. He hits the female Comanche. Pins her down and asserts his dominance. No doubt in my mind that he will fall in love with that women and she will take his virginity.

OH SHIT. The very next scene she does just that. I’ve never been more right about a prediction. Then again, this show is force feeding us the information.

Pete reads Jeannie a bedtime story. It’s Huck Finn. Jeannie says she would have helped Jim too even though it was wrong. This urges Pete to free Cesar like a god damned fool. Cesar thinks it is a trap so as soon as his hand are free he attacks Pete. Pete fights back and kills Cesar like he should have done from the start.

I said it five times already but I’ll say it again. The writing is so heavy handed, you would think this is a CBS or TNT show. AMC usually doesn’t cater to the dumb but this show is basically screaming everything at us.

The 1849 timeline continues to be the more interesting story but it was shown even less this episode than the first.

The only thing that I’m not sure where they are going with is Jeannie. She got an awful lot of screen time this episode. First, she didn’t want to play piano because she was more interested in protecting the house. Then she says she will shoot anyone that lays their hands on her. Then she says she would have helped Slave Jim even though it was wrong, just like Huck did. That last one doesn’t fit everything else. I thought they were setting her up to be this little kid with a false sense of toughness. Leading to her being taken from a rival of the McCulloughs and held hostage. But then they have her say she would have done the noble thing and helped Jim.

From a technical standpoint, I thought the extreme close-ups at the beginning of the episode were jarring/stupid. They didn’t fit the vibe of the show. The first two times we were in 1849 the cameras were moving all over the place. Ever scene in 1915 is a steady and fixed shot. The close-ups seemed like a gimmick for the DP to have fun with some different equipment. I’m talking about these shots…