Imagine my shock as I’m getting ready for work this morning and I overhear something that’s obviously a movie trailer on the TV and it finishes up with “critics are calling The Book of Henry the best movie of the summer“… and it’s already in theaters.  Well that’s a big problem, at least in my mind. If I consider myself a big movie guy then this is just unacceptable. Thoughts and questions were racing through my head on my way to work. “How could I miss this? How could a movie of substance slip past me? Was I too distracted with all the typical summer blockbusters to notice? What the hell is wrong with me?”
I got to work and did some quick googling. I didn’t include this movie in my June Trailer Dump because it was only listed as a limited release. I only write about wide releases, if I included the limited ones then it would be roughly 30-40 trailers a month. I don’t have the time to write that, and you don’t have the time to read it.

So I watched it. I watched that trailer posted at the top of this blog. You know what? I hated it. I don’t use “hate” lightly here. This is some true hate.

Is this a movie about an 11 yr old genius? Is it about a single mother depending on her son to maintain her financials? Is it a teenage romance between the son and his classmate who lives next door? NOPE it’s about that girl next door getting abused (I gotta assume sexually) and the genius kid teaming up with his mom to kill the step-father neighbor with what seems to be a Rube Goldberg Machine. Yup. That totally checks out.

From what I can tell from the trailer, this movie struggles to have an identity. Officially its a Teen Drama/Thriller, but it deals with some heavy shit. It’s like a very serious and not funny derivation of Home Alone. This kid is super smart, well beyond his years, but convinces his mother to murder his neighbor to save the girl he’s crushing on. You can’t build a character to be reasonable and intelligent only to have him turn around and do something so completely irrational and juvenile. I’m sure the actors did a decent job, maybe the director did some worthwhile things, but at the end of the day if the story sucks then it all sucks.

Looks like I’m not alone in my judgment either. 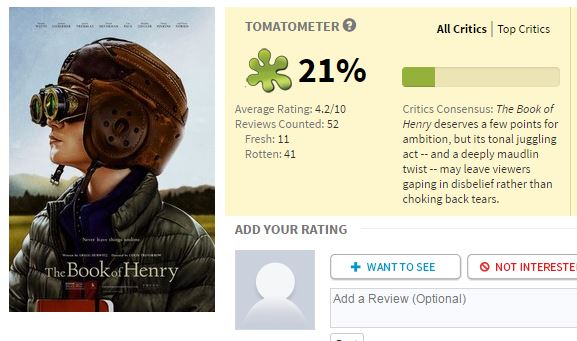 SO WHO SAID THIS WAS THE BEST MOVIE OF THE SUMMER?

Don’t forget, this whole blog started because the TV spot said “critics are calling The Book of Henry the best movie of the summer“. I have yet to find a single critic review that says those words. I’ve tried for 30 minutes, which is WAY more effort than it deserves. Bravo to the marketing department here, they almost got me thinking I need to see this thing. I guess if you pay some small-time critic* with a wordpress site to say it’s the movie of the summer, then they’re not lying when they publish those words. Brilliant move. Too bad the internet is a pretty accessible and a well-known tool these days, because the bad reviews are pretty clear. This movie sucks.

* Pay me and I’ll publish anything you want.