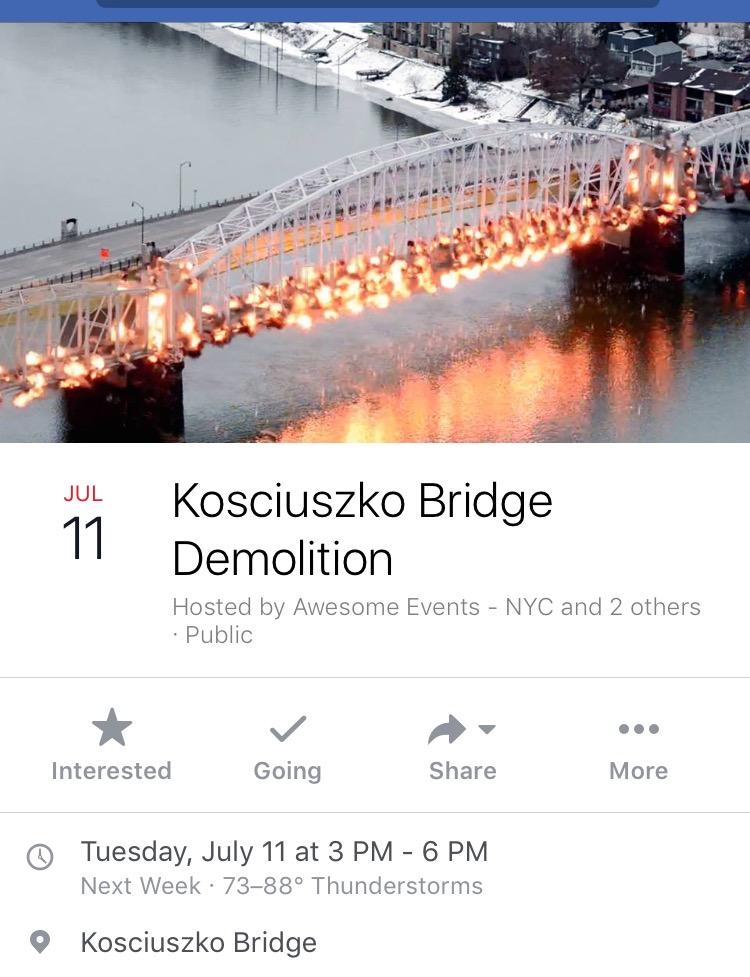 I’m a simple man with simple tastes. I think I speak for most of us when I say that I enjoy seeing shit get blown up. I like loud. I like powerful. I like massive amounts of energy rippling through space right in front of my eyes. Don’t even get me started about Air Force fly overs ( I usually require a couple tissues).

So about a year ago, when I heard that the Kosciuszko Bridge was gonna get blown to smithereens, I instantly bookmarked the date. Joined all the Facebook pages, followed a bunch of demolition fanatics on twitter. Just submerged myself into the bridge blowing world like I was Daniel Day Lewis preparing for a role as a civil engineer. Even did a little google earthing to scope out the best vantage spots to pop a squat and drink some King Cobra while I watch the show.

Well, all of that hope fizzled into the summer sky this morning when I woke up and read this nonsense.

WNYC– But there’s a problem: officials from the New York State Department of Transportation told WNYC Friday they haven’t set a destruction date for the old bridge, which connects Brooklyn and Queens.

“No date set yet,” a spokesman who did not wish to be named said. “We look forward to celebrating.”

And, perhaps to the disappointment of those planning to attend, the spokesman said there won’t be an explosion, or even sparks — definitely not an explosion of Hollywood proportions.

Instead, the old bridge’s main span will be lowered into Newtown Creek and taken away on a barge.

Then, the approach spans will be imploded in a process known as “energetic felling” at a few points along the bridge, and collapse onto some berms below.

The traffic-congested bridge on the Brooklyn-Queens Expressway is being replaced with two new, six-lane spans. The first opened in April, and the second, which will stand in place of the old bridge, is slated for completion in 2020.

Uhhh excuse me? What did I just read? There wont even be an explosion? Not even some fucking sparks? What kind of horse hockey is this! Here I am sitting with bridge-blowing-blue-balls and you just casually come out from hibernation and tell me your gonna lower it onto a barge? Boooooooooo. Not only is that as exciting as watching grass grow, but  just sounds like a TON more work. Just strap the thing with some C4 and take cover.  The bigger the explosion, the less chunks are left over to clean up. Its demolition 101, just vaporize that bad boy.

As of now the Facebook page lists 5.8k as “Going” and about 18k as “Interested”. Almost 6 thousand people were gung-ho about  watching this thing go up in a fiery ball, and the city just decides to kibosh the whole thing and basically just perform a big baptism. Lame. As. Shit.  Like, I honestly feel ripped off. Jipped. Defrauded. Bamboozled to epic proportions.

I really don’t know who to blame, the big wigs who just rained on my parade, or myself for thinking something that cool would actually pulled off by a bunch of nerds in hard hats and blazers. Yuge let down.